The highlight for the volunteer dentists on Imvelo’s Mobile Dentists’ Safari 2015 came at the end of the last day of the annual event. After a manic day at Lupote during which 621 patients received attention – and no one was turned away – as the exhausted team drove out, a crowd of patients waiting for their bus ride home stood clapping and waving.

In what has become a massive logistical undertaking, this was the fifth year Imvelo has organized the Dentist’s Safari, with the participation of a team of Spanish, Italian and Zimbabwean volunteers working miracles in the blazing November heat. The clinics were held at four locations over five days and a total of 2 500 patients were seen. 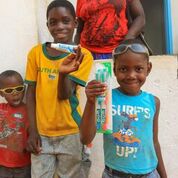 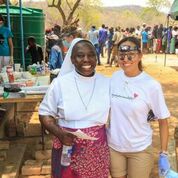 Days One and Two were at Kapane Clinic near Bomani and Camelthorn Lodges along the southern boundary of Hwange National Park. The numbers were staggering. In two days they treated 950 patients from the remote villages, 580 on the second day. Over 1000 platefuls of sadza and beans were served to the hungry, while 1000 toothbrushes were dispensed and every child at Kapane Primary and Secondary schools were checked and treated if necessary, and all given oral hygiene talks.

Clinic Day Three was based at Zambezi Sands Lodge in the Zambezi National Park, from where the Imvelo team set up a full day at Ndlovu Clinic to work wonders for the communities in a 50 km arc around Victoria Falls.

It was another huge day in the blistering heat. A total of 517 patients received dental care and another 31 were examined by the optometrists who dispensed spectacles on the spot. More than 200 dark glasses were distributed, to protect vulnerable eyes from harmful UV rays. Water bottles were handed out to school kids and over 700 meals were cooked and served.

Days Four and Five were clinics at Lukosi and Lupote for the communities to the north of Hwange Park. The team was based at Nehimba lodge, first time for the dentists, and an opportunity to enjoy the unique elephant experience there.

The first clinic at Lukosi treated 381 patients on a day that recorded temperatures in the shade well over 40 degrees Celsius. But it was the next day at Lupote that the magnificent team of volunteers had their finest hour. On a day blessed with a cloudy sky the clinic was thronged with people. Our buses shuttling in patients from the villages arrived full every time, and many more streamed in on foot. Every single patient was treated, fed and then bused home too. Free dental care for 546 people, 75 had their eyes tested and received spectacles and over 700 meals were served.