The capture and dehorning of the new rhino shortly arriving on the Ngamo Plains, Hwange NP

Home/The capture and dehorning of the new rhino shortly arriving on the Ngamo Plains, Hwange NP

The capture and dehorning of the new rhino shortly arriving on the Ngamo Plains, Hwange NP 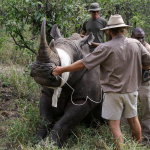 Take a look at the first White Rhino soon to be translocated to the Imvelo Ngamo Sanctuary as Phase 1 of the Community Rhino Conservation Initiative, that will reintroduce White Rhino to Hwange, but excitingly this time, on community land.
The decision was taken to start Phase 1 with just 2 Bulls, this is precautionary until the project proves successful, breeding age females will be added later.  Bulls #803 and #204 were chosen, the former 8 and the latter 7 years old,  and last week the professional team at Malilangwe supported by Parks and Wildlife Management Authority and experienced vets from the Vic Falls Wildlife Trust swung into action. 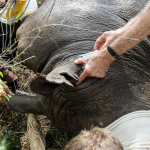 Before first light of day, the highly trained and very experienced Malilangwe scouts deployed on foot and by 0730hrs they’d found the two rhino. They directed the darting team in and #803 received his cocktail of tranquilisers squarely in the rump. Once groggy, he was blindfolded and roped, his identity verified from distinctive ear notches and the team jumped in to spray him with water to keep cool, oxygenate him, monitor his temperature and respiration, dehorn him and fit him with a radio transmitter. 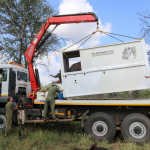 The Rhino truck was parked in position, crane arm deployed and once the crate was offloaded, #803 was partially revived, and ‘encouraged’ to enter the crate. The crate, now ladened with rhino, was swung back onto the truck and driven off to HQ to the holding boma.  After a quick cup of tea and turn around, the team were back out and just a few hours later, #204 was on the truck in his crate headed for his boma, just next door.  This team made the whole process look very easy.

In the holding bomas, the rhino were closely monitored. A few days later, they were reintroduced to each other and after a little ‘jousting’, were soon grazing together in the paddock adjoining their bomas. The next few weeks will help habituate to people and trucks in close proximity and thus help them deal with the 720 km road trip that lies ahead of them.

To find out more go to : Hwange Community Rhino