Here’s What Is New From H&S

Home/Here’s What Is New From H&S

Here’s What Is New From H&S 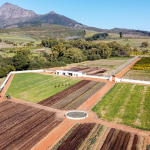 Babylonstoren continues to evolve and we are excited to share the incredible new kitchen garden. The garden is already in full swing meeting the growing demand of the two restaurants and of course the ever popular farm fresh boxes, available locally. In keeping with the typical Cape Dutch building style of the farm, this new garden sits next to the Succulent House and is surrounded by a white,  stonewashed wall. Guests can stroll in between the four sections of the garden which have been planted with a variety of seasonal vegetables including asparagus, artichokes, rhubarb, rosemary, cabbages, fennel, leeks and a variety of herbs. In preparation for next summer’s pumpkins, large areas have been prepared with lupins, fava beans, peas, grains and wild mustard.

In addition, the Olive Oil and Balsamic Vinegar tours have become two separate tours. Guests can learn how olive oil is created  and can taste and make their own blend to keep and to take home. The balsamic vinegar tour gives guests an insight into the traditional methods used to create the farm’s unique vinegar and guests are invited to taste both the IGP-style three year old and the DOP-style twelve year old balsamic vinegars. What’s not to love?! 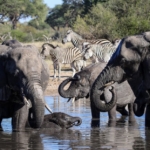 Imvelo joined the rest of the world this month to celebrate world elephant day. Hwange is home to nearly 50,000 elephants which, together with the rest of the Kaza Transfrontier Conservation Area, makes this the largest population in Africa. Despite ever challenging circumstances, Imvelo maintain a network of 16 pumped waterholes in and near the Park supporting around 20% of this population during the dry season.

For 14 years Jozibanini, in the remote south west of Hwange National Park, was without water throughout the long dry season.  Elephants and other wildlife which had come to rely on this resource provided by man either migrated or died.  Back in 2014, Imvelo was extremely excited to once again start pumping water at Jozi – it was the first step to establishing a presence and a tourism camp that could push back the terrible poaching that had been prevalent in the area and support this remote community that was keen to stop the poaching.  Incredibly, the first time Imvelo set the pumps working at the original Parks waterhole, the elephants recalled the sound and retturned within 40 minutes.  They have just replaced the waterhole which was struggling to support so much demand and now there is a plentiful supply for the elephant and other wildlife in this area.  Hopefully no buckets for the lion and wild dog this year.